The Mystery of the Itchy Nose!

Do you get an itchy nose or itchy palms after eating? Lots of us do; especially after takeaway food, cheese, hams or drinking red wine. Some of us get runny noses and some of us are even allergic to certain foods.

Read on to find out the truth about food allergies, additives and the real cause for the dreaded ‘post-meal itchy nose’…

It all started over a glass of red wine…

My wife rarely reads my blog; She says there are too many long words in it, and not enough pictures of flowers! But if I solve her ‘medical’ question she promised she would read this blog. As I’m a hopeless sucker for a challenge, I obliged.

Here’s how the problem came to light: We were relaxing one evening after a meal out. Sipping from a glass of red wine, she started to rub her nose “Why do I get an itchy nose when I eat certain foods?!”  Because I am a doctor; it is expected that I must know the answer to anything vaguely related to the human body! I politely informed her that I had no idea and that “Post-Meal Nose Itching Syndrome was not something we covered in medical school!”

There clearly are a lot of you that experience the itchy-nose-after-food phenomenon. There are also a lot of different foods that cause it! Please fill out this poll so that we can find out what the most popular trigger foods are. (Try to identify the actual ingredient – you may have to experiment!) Please only answer if you get an itchy nose – if you experience a runny nose, or any other symptom – choose ‘no’ (there is another poll at the end of the article for you to do!) If your food isn’t there, choose ‘other’ then leave a comment at the very end of the post.


What is an itch anyway?

Hard to believe: I was something of a medical student geek!

I hoped that ‘Google‘ would answer my question. Sadly, while it seems lots of people have strange itches and scratches (I’ll spare you the details) no-one seems to explain how eating causes an itchy nose.

So I decided to look into causes of itching, and started to remember what I was like as a medical student…

At medical school, I was the odd and slightly eccentric one. For no particular reason at one point I became fascinated by itches: what causes them, and why we get them! The medical name for itch is ‘pruritis’ and to my utter delight I found several medical textbooks devoted to the subject! Proudly carrying my ‘additional reading’ I got quite a laugh when my friends saw me walking around with “Your Guide to Pruritis”. They obviously presumed I was doing some homework for personal reasons!

There are special nerves in our skin (called C-Fibres) that only sense itch!

Allergies are a common cause of itching (pruritis). So is it possible that us ‘nose scratchers’ are allergic to something in our food?

What is a Food Allergy?

A food allergy is caused because your body’s immune system mistakenly thinks something we have eaten is attacking you. People talk about them all the time, but most people who think they have one actually don’t! 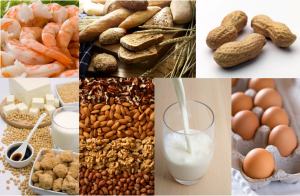 If you eat a food that you are allergic to, your immune system becomes activated: The chemical histamine is released into the blood by your white blood cells. This sets off a sequence of events that can be mild or severe. The worst type of allergic reactions can be fatal and is called ‘anaphylaxis’. This rare reaction causes the immune system to go completely into overdrive. Histamine floods around the body: lips and eyes swell, vomiting occurs, skin rashes break out, wheezing and it becomes difficult to breathe.

Most Food Allergies are Mild but difficult to diagnose

Thankfully allergies are normally very mild: the histamine gives you a skin rash, indigestion or a bit of itching.

My wife and my ‘nose scratching syndrome’ is probably not an allergy for several reasons: 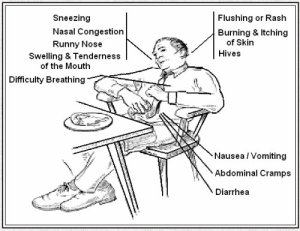 So if it’s not an allergy, could it be all those nasty food additives?

Some people get chest pains, headaches, flushing and burning around the mouth after Chinese food

Since the 1940s, a flavour enhancer called MSG (Mono-Sodium Glutamate) has been used in cooking in Western countries. Originally used in Chinese cooking, it is now in crisps, snacks, sauces and many fast foods. In the 1960s flurries of Chinese restaurant-goers started to experience lots of strange symptoms after chowing down. The finger of blame was pointed squarely at this new ‘artificial’ additive, MSG.

However, after decades of in-depth research it has been proven beyond reasonable doubt that MSG is safe to eat. MSG is found in seaweed naturally and does not cause ‘Chinese Restaurant Syndrome’.

What is ‘Chinese Restaurant Syndrome’? Probably a combination of indigestion, allergies and food intolerances in Westerners diners not used to Eastern spices and ingredients!

Even though MSG is safe, some people prefer not to have it anyway

One solution to a runny nose!

Are you a curry-lover? If so, then you’ll know that the essential partner to your biryani and poppadoms is a large handful of tissues! It is quite normal for us all to get a runny nose when eating hot and spicy foods. However, some of us have this problem particularly badly and get a runny nose after eating practically anything!

‘Runny Nose’ even has a posh-sounding medical name: ‘Gustatory Rhinitis’!

Every time we eat, blood gets sent to our face and nose. This is to help our salivary glands work and to carry away the heat from our hot food. An unfortunate side-effect of this process is more blood flows into your nose and makes your nose run!

Facial Flushing? Blood flow is ‘unconsciously’ sent to the nose and face when eating

But gustatory rhinitis doesn’t normally cause nose itching, but understanding that blood gets sent to the nose after eating may help us to solvel this medical mystery…

The true cause of after-meal nose itch: ‘Eating Histamine’!

What do all these itchy-nose foods have in common?

Any ideas what these foods have in common?

Eating Histamine sounds dangerous! Should I be concerned?

Unless you’re planning on ingesting an industrial amount of histamine, eating the histamine found in food doesn’t cause a problem in most people: It all gets broken down and digested during eating. Occasionally some unfortunate people’s bodies aren’t able to destroy histamine and so every time they eat any foods high in histamine they get severe ‘allergy-like’ symptoms. They are missing an enzyme in their guts and they are ‘histamine intolerant‘; such people can have severe problems (sneezing, wheezing, rashes and diarrhoea).

My wife and I don’t have ‘histamine intolerance’; we only get mild nose itching when we eat lots of these foods. Quite a few people I have spoken to also say they get an itchy nose when they do the same. My conclusion is that if any of us eat enough histamine-rich food then some will end up in our bloodstream and give you an itch! And with blood flowing to your nose and face anyway because you are eating; these small amounts of histamine will tend to end up irritating the tip of your nose! 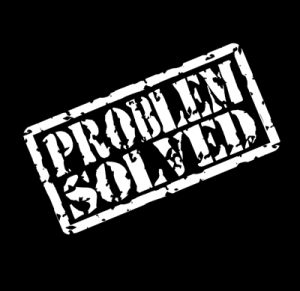 What about itchy palms?

I have failed to find conclusive evidence to show that histamine is the cause of itchy palms but reactions to histamine can be very individual: some feel itches, some headaches, other people may get sneezes.

If this is you then it may be worth trying a low-histamine diet: it’s the closest thing you’ll get to a cure.

This is (to my knowledge) the first explanation of the common ‘post-meal nose itching’ phenomenon. There has been research that agrees with my explanation, but I will need to scientifically prove it in order to apply for a Nobel Prize!

All I need to do in is arrange an “experiment” where ‘subjects’ eat a selection of histamine-rich foods (such as pizzas, chinese food, hams and cheeses) and drinking red wine and beer, and then tell me how much their nose itches.

INTERESTED IN THIS SORT OF STUFF? I’ve been part of a team that has just launched a new (free) bi-monthly magazine which aims to deliver more of the same. It all started on 1st June 2011 – Check it out here!

Thanks for reading – comments and feedback are warmly welcomed!

DISCLAIMER: All of the writing in ‘Doctor Stu’s Science Blog’ are intended for educational and entertainment purposes only. Please do not base your healthcare decisions on the information contained in this blog: Always see your GP first!

I love writing about science and health subjects. Strange, because I also teach the same things. I trained as a medical doctor before turning my hand to other things. Shortlisted for The Guardian/Observer for Science Writer of the Year 2011 and editor for Guru Magazine I also like to grow large pumpkins...
View all posts by Stuart Farrimond »
« Obama Meets The Robots: But Could They Save the World?
Take the Music Personality Test! Find out what Your taste in Music says about You! »

298 thoughts on “The Mystery of the Itchy Nose!”