A chocolate a day (may possibly) keep the doctor away

The Easter eggs don’t last long in our house. It wouldn’t have always been that way though: as I child, I would diligently squirrel away Easter chocolate, treating myself only on special occasions. I now have no such willpower and, by the looks of it, neither do the rest of you. A recent survey has shown that 43% of us hide chocolate wrappers to conceal how much we eat while 37% of Britons tell outright lies to our spouses about the amount they scoff. Presumably the world’s chocoholic scientists also share our guilt because over the years, chocolate has been one of the most intensively researched foodstuffs in nutritional science. Thousands upon thousands of research papers have searched for health-giving virtues in our favourite indulgence – over 1,600 studies look at cocoa’s effect on the heart alone. The prospect that excusing our chocolate addiction just seems too tantalising to resist.

All this research has thankfully not been in vain. We now know that cocoa could have nutritional merits: cocoa beans are packed with an assortment of antioxidants and flavonoids – similar substances to those in red wine what that are purported to give a healthier heart. Taken alongside a varied diet, these compounds may actually help lower blood pressure and cholesterol. The fat within cocoa beans (called cocoa butter) also seems to not be as sinister as once thought and doesn’t increase cholesterol in the same way many other fats do. The cherry on the cake, however, is that pure cocoa could have wide-ranging benefits; some initial lab-based research suggests cocoa may have an effect on protecting against bowel cancer. 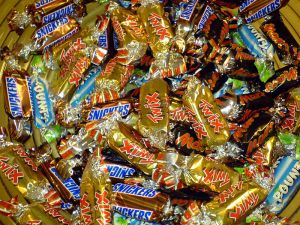 The good news ends there for chocolate fans, I’m afraid. Most of us like ‘chocolate’ that contains so little cocoa that it doesn’t legally qualify as chocolate in many parts of the world. Look closely at your favourite brands and you will be surprised at how few bars actually just have the word ‘chocolate’ on their wrappers. In the EU, anything called ‘chocolate’ must contain at least 35% cocoa solids. ‘Milk chocolate’ can get away with 25% cocoa solids (or 20% in the UK). Everything else is called ‘confectionary’, although ‘cocoa-flavoured sugary fat’ would be more accurate. The USA are particularly accommodating in their definition of ‘milk chocolate’, allowing as little as 10% total cocoa content, other ingredients being sugars, vegetable oils, milk and favouring. It’s no wonder that American chocolate tastes so bad.

Generally speaking, it is wise to be sceptical about chocolate-based health claims. Findings that dark chocolate can “reduce anxiety” and “make gut bacteria healthy” are just two examples of research funded by chocolate manufacturers (in this case Nestlé and Mars respectively).

The only chocolate worth considering on health grounds is dark chocolate that has a high cocoa content (70%+). White chocolate has no nutrient-rich dark cocoa (only the cocoa butter) and so won’t do anything to help your heart. Homemade hot chocolate made from cocoa powder will let you dose up on the cocoa goodness while controlling other ingredients. There is no ‘recommended dose’, however, and all types of chocolate are high in calories and should be eaten in moderation. Up to one square a day of dark chocolate, taken alongside a healthy diet, is seen by many as a sensible choice. Unfortunately, there is no prescription for self-control.

I love writing about science and health subjects. Strange, because I also teach the same things. I trained as a medical doctor before turning my hand to other things. Shortlisted for The Guardian/Observer for Science Writer of the Year 2011 and editor for Guru Magazine I also like to grow large pumpkins...
View all posts by Stuart Farrimond »
« ‘Google to rank pages by accuracy’ shown to be inaccurate
Is owning a dog is good for you? Separating howling myths from tail-wagging truths »