//
you're reading...
Science, Technology, The Mind

Have you ever done a ‘leadership’ exercise?

I’m sure you know the sort of thing – You’re on a corporate “training day” and after being placed into arbitrary groups in a stuffy meeting room, you are given a handful of straws, paperclips and plastic cups and told to build a tower that reaches the ceiling. Oh, and it’s a race.

Normally billed as a light-hearted ‘ice breaker’, such tasks are watched by an eagle-eyed organiser – on the lookout for the ‘natural leaders’. Which people are the ‘doers’; who are the diplomatic types; and who like the sound of their own voice a little too much?! These activities make me cringe – they feel artificial and forced – and worse, presume that true leadership can be identified in a conference room.

But is leadership really an inherent ability that some of us have but others don’t? Researchers from the University of Amsterdam seem to think so. In newly published work, they claim to have developed a computer program that not only predicts who are the best leaders from facial characteristics, but will also tell you who will win the next presidential election…

Could you be a Leader?

When I was sixteen I wanted to join the Army and I applied for a two day Army leadership test. I didn’t do very well. Shouting men in beret’s made me irritable. It was fun (in a strange, masochistic way) and I failed catastrophically. Clearly, I’m not military material.

The Army spends a lot of time and energy searching out future leaders – people who will inspire, motivate and, if the time comes, lead people to die. The US Armed Forces have gone as far so as to fund the development of a computer system that – presumably – they hope will be able to spot the next generation of leaders. Dutch leadership theorists were tasked with the job and, bizarrely, they came up with a computer program that relies on facial characteristics to spot folk destined for the top…

How the Computer spots a Born Leader…

Yes We Can... predict who will win with a computer program...

Mark van Vugt from Amsterdam University devised a rather complex theory on leadership called the “evolutionary leadership theory”. One of the key tenets of this (and several other) leadership theories is that different people are better suited to lead in different situations. Let’s face it, I may not be cut out for leading a platoon – but I can run a pretty good pub quiz.

They compiled these and a handful of other leadership characteristics into a mathematically mind-melting computer simulation. Then they tested it on data from the most recent US presidential elections.

The Software that Predicts Election Results…

Pumping in opinion data from the 2004 and 2008 US presidential elections to their silicon election predictor, they compared Gallup poll results with their computer’s predicted ones. Naturally, their results made striking similarities to actual poll results – although it is quite possible they went back and ‘tweaked’ their original equations until the results matched…

The Subversive Uses of a Computerised Leadership Predictor

The notion of a ‘natural leader’ for all situations is, thankfully, largely consigned to the history books. Life experience shows that this simply isn’t the case – a leader on the battlefield will probably be hopeless running a retirement home tea party. 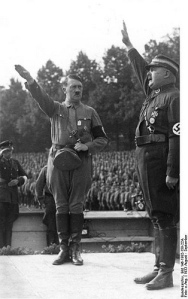 I suspect that large corporations, the military and political think-tanks would be overjoyed if their ‘ideal’ future leaders could be found with a simple click of the mouse. The software showcased in this research is still in prototype stage, but future iterations will certainly get much closer to this reality.

One suspicious use of this computer program software that its developers suggest is that it be used by politicians to “manipulate” how their voters view the world. In the same way that dictators convince their populous that an unseen enemy lurks at their doorstep, these Dutch researchers claim their new program will show how democratically elected individuals can apply media spin to gain the upper hand – and appear a more attractive leader than their opponents.

It was brave to openly publish such an idea: the suggestion that a computer program should inform the power-hungry on how to deceive their voters is pretty ethically twisted.

How possibly could this development be a step in the right direction? The notion that leadership is predetermined stinks of the eugenics movement. All of us have different abilities and capacities – but isn’t leadership just an ability like any other that can be learnt and developed?

Perhaps I am being naive but thankfully, the world I live in doesn’t seem to obey simple rules. Although planets, protons and plants follow laws, people around me never cease to amaze. Since homosapiens first emerged, unremarkable people have done, and continue to do, beautiful, exceptional and unexpected things…


Thanks for reading – comments and feedback are warmly welcomed!

INTERESTED IN THIS SORT OF STUFF? I’ve been part of a team that has just launched a new (free) bi-monthly digital magazine which aims to deliver understandable science writing but without compromising the facts. It offers undiscovered writers a chance to write to a growing audience of readers. You are welcome to check it out here!

I love writing about science and health subjects. Strange, because I also teach the same things. I trained as a medical doctor before turning my hand to other things. Shortlisted for The Guardian/Observer for Science Writer of the Year 2011 and editor for Guru Magazine I also like to grow large pumpkins...
View all posts by Stuart Farrimond »
« “Don’t Blame Me Officer! I was Sleep-Driving…”
Why is the Universe is Expanding and Accelerating? Here’s my pet theory… (by a non-physicist) »