The IQ Myth and its Fascist origins – Just how Intelligent are You?

Are you a puzzle-solving braniac?

Western culture has a peculiar fascination with ‘intelligence’. I’ve not taken an IQ test for years – and hopefully never will again. Being ‘intelligent’ is held in ludicrously high esteem (second probably only to good looks) that most people think they’ve either got it, or they haven’t.

The ‘doctrine’ of an inborn intelligence seems to be ingrained in academic thinking. If I had an apple for every time a student told me “I failed because I wasn’t clever enough”, I could probably quit lecturing and go into the cider-making business.

The truth is, the very idea of IQ, ‘intelligence’ and being ‘clever’ is hugely controversial. Did you know that the IQ test was developed and popularised by the Nazis? Fascist Germany used the test as a way to ‘ethnically cleanse’ less desirable out from their society.

Sadly, many of the early inaccurate, racist and pejorative assumptions about the IQ (“Intelligenz-Quotient”) test are still believed by many people today…

Intelligence Testing and its Dirty History

Like ‘Love’, ‘Intelligence’ is a term that everybody thinks they understand – but in reality it has a different meaning to everyone. ‘Clever’, ‘smart’ and ‘intelligent’ are words ubiquitous in the English language, but are without any clear definition. Devised in the early 20th Century, the IQ test was intended as a way to screen for childhood ‘mental retardation’. Quickly seized upon by all and sunder as a test to measure the total of a person’s mental abilities, its French creator would be turning in his grave: Test-deviser Alfred Binet was clear – IQ testing was to serve to identify children needing extra help at school and not to be a “general device for ranking … according to mental worth.” Alas, the worst of human nature couldn’t resist the allure of this highly effective screening tool…

Nazi Germany used the IQ test to protect the ‘Fatherland’ from genetic impurities – low scoring individuals were forcibly sterilised. They weren’t the only ones; one of the earliest proponents of this method for eliminating ‘degenerates’ and ‘retards’ was the American Psychologist Lewis Truman. In a period of history America would rather forget, thirty states passed laws in the early 1900s forcing ‘low grade’ people to be sterilised. And they were, in their thousands.

So what is IQ anyway? 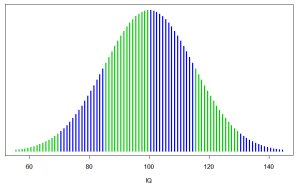 Graph of IQ test results - the average is 100. Anything above 130 is classed "Very Superior".

The IQ test has been hugely overhauled in the past 50 years, but the core remains the same: it measures mathematics, analysis and problem solving ability. Attempts have been made to make it applicable across cultures, although such psychological tests are inherently Westernised and will never be able to measure an entirety of person’s brain power.

None of these IQ aptitudes are ‘set in stone’ – all are skills that can be learnt and developed. Importantly, IQ testing makes no account of equally important qualities like ‘emotional intelligence‘ and creativity. Why then do we persist in giving IQ and ‘intelligence’ (in its narrowest meaning) such significance?

Are IQ tests a useful indicator of abstract problem solving? Yes. Are they a means of identifying students in need of additional support? Undoubtedly. But isn’t it time that we took a leaf out of many Eastern cultures, who place more value on a hard-work ethic and tenacity? In the real-world, these are qualities both we and our children should aspire for.

A part of me wishes IQ tests never existed. We aren’t using it for ‘ethnic cleansing’ anymore, but the notions of ‘high IQ’ and ‘low IQ’ are still elitist and ultimately divisive.

Let’s do away with aiming for high IQ, and encourage the next generation that they have intrinsic worth, regardless of a test score.

…and no Roger, “I’m not clever enough” is not a reason for not doing your work…

Are you an IQ test fan? Your comments and feedback are warmly welcomed!

I love writing about science and health subjects. Strange, because I also teach the same things. I trained as a medical doctor before turning my hand to other things. Shortlisted for The Guardian/Observer for Science Writer of the Year 2011 and editor for Guru Magazine I also like to grow large pumpkins...
View all posts by Stuart Farrimond »
« The Brainstorming Myth: Why it doesn’t work and is a waste of time…
Obama cracks a joke to the Atlantis Shuttle Crew – So why wasn’t it funny? »

54 thoughts on “The IQ Myth and its Fascist origins – Just how Intelligent are You?”