The Burns Night Face-Off: Haggis versus the Big Mac! Which is really better? 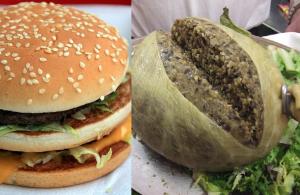 Haggis vs. BigMac: Which is really better to eat?

Haggis is like Marmite: People love it or hate it. Banned in the USA and slammed by health critics, just how bad can this Scottish delicacy really be?

Haggis is no longer the reserve of the ardent kilt-wearing Scot because more and more of us Burn’s Night revellers are opting for this authentic fare. Not helped by its anaemic appearance, the haggis has an image problem. Ardent proponents of this ‘boil in a bag’ of sheep innards claim that it is authentic, traditional, and no worse than most processed meat products many of us eat.

So, on the eve of my first Haggis experience (I know I’m late for Burn’s night), I cast a critical eye on the evidence for and against this Scottish national dish.

And I promise not to use any offal puns…

What goes into a Haggis?

The culinary contents of a haggis don’t sound particularly appealing: Sheep lungs, heart and liver, mixed with oats, onions and stewed in a bag of animal intestines… 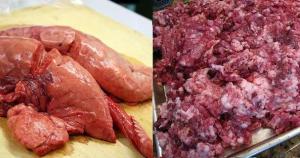 Which would you rather eat: Offal (left) or Sausage meat (right)?

“Eergh! How could you eat that?”

I appreciate sheep offal doesn’t look very attractive, but how much worse is it really to other animal-based foods? Black pudding is dried blood for crying out loud!

If it’s the sound of sheep intestines that creeps you out, sausages were also traditionally made in intestines. These days unless you get your bangers or haggis from a very traditional butcher; both come in a synthetic casing.

But let’s get down to some numbers… How does haggis line up against familiar, more socially acceptable foods? (click image to zoom in):

Remember kids, even though it looks like a big mouldy aubergine, it won't qualify as one of you five-a-day

Well, haggis is certainly not going to qualify as one of your five-a-day, and it misses ‘low fat’ and ‘healthy’ categories by the distance of a good caber toss. But by comparing the nutritional facts of a traditionally-made haggis and it’s more fashionable meat counterparts, the Haggis is nutritionally similar to sausage (and gram-for-gram actually has less fat)!

Why then would a politician stand up and declare the haggis poses a special risk to the health of children?! Surely everything in moderation?

The Big Mac might appear to come off better, but only if you eat half of one (a full one has a heart attack-inducing 30g of fat and over 500 calories)!

It can undserstand people who are squeamish about eating offal; with the exception of steak and kidney pie, we just don’t eat animal organs very much anymore. Historically, offal would have been in all sorts of pies and sausages but current legislation means that offal cannot be labelled ‘meat’. Many people think that this distinction is a little unfair, especially considering that offal can have important nutritional benefits not found in a BigMac or a Sausage: Liver and kidney are a great source of vitamins A, B and iron!.
.

A look at the evidence: Is haggis safe to eat?

The most controversial ingredient in haggis is sheep lungs. Amid the BSE (Mad Cow Disease) outbreak in the 1980s and 90s, there was a ban on foods containing cow brain, spine. Mad Cow disease is a nasty condition caused by infectious proteins called ‘prions’. By eating the brain of an infected creature, it is possible that other animals (like us) can catch it.

Your haggis is served...

There is still a lot we don’t understand about BSE; for example, why have only a small number of people caught BSE (in humans the disease is called CJD – Creutzfeldt–Jakob disease).

It was in the midst of this public panic and uncertainty, that sheep lung was temporarily banned as a ‘precautionary’ measure. Since then, sheep products have been shown to be safe (as far as is reasonably possible) by the UK Food Standards Agency but the ban still exists in some parts of the world… To the fury of many a Scot!

The Food Standards Agency, have also investigated claims that sheep offal might contain high levels of toxic heavy metals and carcinogenic dioxins. A comprehensive survey of British food showed that such concerns were unfounded.

Poorly washed and sheep intestines can increase your chance of food poisoning, especially if not cooked all the way through. But considering most of the commercially produced haggis doesn’t contain intestines anymore, this shouldn’t worry many of us…

Conclusions: To eat or not to eat?

Haggis is a high-fat, salty food, as are many foods that we eat. But in treating yourself to a portion of haggis you aren;’t going to send yourself to an early grave. Nearly all of the scare stories have finally been laid to rest and Haggis has definite nutritional benefits when compared to a pork sausage or a BigMac.

One important proviso: Given that Haggis is a good source of vitamins A, B and iron, pregnant women should probably limit their haggis intake (as too much vitamin A can lead to problems).

And so now, with eager anticipation I look forward to tonight’s taste test…

…and if it tastes horrible, I shall retract all my haggis endorsements. 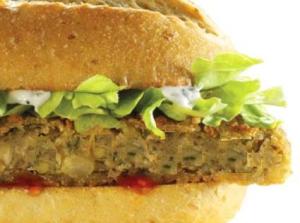 You saw it here first: The McHaggis Sandwich! I'll have mine with a side of neeps please...

Is the Haggis inedible? The American government think so!

Find out what makes up part of your ‘five a day’.

Confused about different types of offal? Read more about what they are here

Advice on healthy eating during pregnancy available from BBC Health

Read more about how the USA is lifting its ban on Haggis (Guardian.co.uk)

I love writing about science and health subjects. Strange, because I also teach the same things. I trained as a medical doctor before turning my hand to other things. Shortlisted for The Guardian/Observer for Science Writer of the Year 2011 and editor for Guru Magazine I also like to grow large pumpkins...
View all posts by Stuart Farrimond »
« Geek-Gadget of the Week: The SmartPen!
Art and Science: If a Picture Could Say a Thousand Gigabytes… »

4 thoughts on “The Burns Night Face-Off: Haggis versus the Big Mac! Which is really better?”