What is Ebola? Why is it scary? A really simple answer

“Ebola Virus outbreak” is a headline that produces terror. Well, it should… but I’m not sure that it does. There’s been an outbreak of Ebola in Guinea and Liberia in West Africa, but how many of us actually know what Ebola is – let alone why it is so scary? A quick poll of friends showed that they didn’t know what it was either (i.e. “flesh eating bug”).

So let us find out what Ebola is, and whether we should be scared about it:

1. Ebola is scary because it’s gruesome

Ebola is notorious because it produces symptoms straight out of a horror movie. It’s difficult to imagine anything more horrific than bleeding from mouth, nose and back passage; having violent seizures, and then dying. That’s what Ebola virus infection can cause. Now you understand why it gets all the attention.

It is the bleeding symptoms that gets people most scared; but it’s a myth that all unfortunate souls suffer profuse blood loss from body orifices. Bleeding occurs in a minority of cases (under 45%) and infected people don’t die from blood loss. The main Ebola virus symptoms are similar to many other viruses (fever, aches, muscle weakness, vomiting, diarrhoea).

2. Ebola is scary because it kills most people who get it

Up to 90% of everyone who catches Ebola virus die, so if you’ve caught it then it’s probably game over. It is made all the more frightening because an infected person can go for three weeks before they start to have symptoms; during which time, they can spread the virus to those they come into close contact with.

But… Ebola rarely spreads very far because it is only spread through contact with sweat, spit, blood, or other bodily secretion. This means that it is only people who get up close who can catch it – the virus can’t be spread through the air or drinking water, for example. And because of the disease’s severity, it is picked up very quickly by medical services who then set up measures to control its spread.

Also, the 90% mortality given on the World Health Organisation website is the worst case scenario. The average mortality rate for all recorded cases is 66%.

3. Ebola is scary because it can’t be cured

There are no antiviral medications or vaccines that work to stop Ebola. Hopefully, a vaccine in mice was created in 2011, but has so far failed to materialise into anything of use for people. 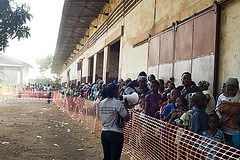 Ebola is a deadly, horrible disease. It should not be ignored and deserves worldwide attention. Undoubtedly, more should be done to find treatments that work. However, Ebola kills relatively few people – less than 1,700 people have been killed by the virus since the 1970s. Medical efforts and quarantines have a lot to do with this. But compare Ebola to malaria: both are incurable infections which affect the same regions, yet malaria killed 600,000 people last year. (The true number of malaria victims could well be double that figure.)

Ebola outbreaks occur in impoverished rural regions of Africa – parts of the world in desperate need of help in so many ways. As tragic as an Ebola outbreak is, my sincerest hope is that every time there is such an outbreak that it not only stirs fear, but also stirs the conscience of the West to do more about the wider tragedies affecting those areas.

I love writing about science and health subjects. Strange, because I also teach the same things. I trained as a medical doctor before turning my hand to other things. Shortlisted for The Guardian/Observer for Science Writer of the Year 2011 and editor for Guru Magazine I also like to grow large pumpkins...
View all posts by Stuart Farrimond »
« Why “7 a Day” is the new “5 a Day”
‘Breastfeeding is best’ unless you’ve been drinking alcohol »

One thought on “What is Ebola? Why is it scary? A really simple answer”