The science of health, food and life explained

Get fit faster: listen to music!

It’s now officially Games Over. Gone is the excuse to bunk off work to catch five minutes of of dressage or synchronised swimming. And as our love affair ends, normal life must resume. The real challenge now begins: to stay true to those keep-fit resolutions.

One of the tricks to stay motivated may be, quite literally, music to your ears. ‘Music has received very little attention among sports scholars’ wrote one author in 1993 in the Sociology of Sport Journal.  Since then, much has changed. Long distance champ Paula Radcliff swears that her playlist during training – insisting it helps to keep her going. Yet Usain Bolt is denied such an indulgence.

Taking a perusal trough the latest research, we’ll explore what is known about the power of music to get you fired up and heading down the gym. Even when The X-Factor is on…

Just as a rocking beat might make you drive dangerously fast, an uplifting tune can lift the spirits – inspire you to run.

Generally speaking, the body is pretty good at judging how much strain we are placing on it; let’s face it, when you’re dripping with sweat, the heart is pounding and each breath is a struggle – you know you’re reaching your limit. How strenuous we feel an exercise is is measured by its RPE (rating of perceived exertion). Should you be so inclined, tou can find out your RPE for your last jog around the block here. Remarkably, listening to music can markedly offset how hard we feel we are exercising. Performing an exercise to the right kind of music makes it feel about 10 % less strenuous (as measured by the RPE rating). This works for the majority of aerobic exercises, and for the majority of people. However, taken collectively, the research gives some provisos:

It’s notoriously difficult to judge the tempo of music. So if you’re serious about getting that extra motivation, you can search for your much-loved track here. Go for the ones above 100bpm as a minimum. Regrettably, this rules out most of The Beatles’ songs.

Usain Bolt says he likes listening to slower tempo music – which is one of the reasons his trainer won’t let him get out his mp3 player before a race. But there are other important reasons why Usain only listens to music in his downtime…

Music can make you stronger

Ok, so toe-tapping music makes the exercise feel easier, does it actually make you perform better? Yes it can. Motivational music gives significant reduction in heart rate, blood pressure and lactic acid whilst. But the track must have a tune – strip away the melody and the lyrics – and the drum beat alone has no positive effect.

These melody-stimulated effects also have a limit. As work intensity increases, its positive effects diminish. When working at 80% of your absolute maximum or more (or 80% max Heart Rate), no benefit is gained.

Sprinting flat out, or going through an intense boot camp will not be helped by banging beats. This, almost certainly, is why Usain Bolt’s trainer forbids him from listening to music during training.

Exercising to the rhythm – the most proven method

Sports music research has focused on two different areas: background tunes where the music bears no resemblance to the exercise (‘asynchronous’) and music with a beat that coincides with bodily movements (‘synchronous’). 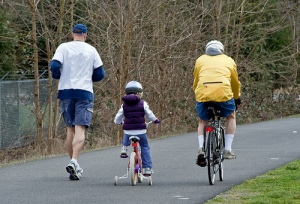 Any kind of exercise that involves repetitive movements (e.g. cycling, jogging or bench stepping) will benefit from music where the tempo exactly coincides with that movement. Haile Gebreselassie famously smashed the 2000m indoor world record in 1998 whilst listening to Scatman played over loud speakers (although I can’t think of anything worse).

Some recent research has shown that when exercising to synchronous music, there is a 7% decrease in the amount of oxygen the body needs – demonstrating that the body works more efficiently with synchronous music.

But even for non-endurance activities, spending a few minutes listening to music immediately before starting can boost confidence and self-belief. Combining motivational music with positive self-imagery has been shown to improve non-aerobic sports performance such as shooting and weight-lifting.

So, providing you don’t go cycling or jogging on the road with your headphones on (potentially very dangerous), it’s probably worth taking your iPod with your running shoes.

The only question remains, as to what music to listen to. I’m a rock fan, but what about you?

Thanks for reading – all opinions expressed are my own. Feel free to discuss in the comments below…