How to Build a Spaceship: The Best (and worst) Amateur Astronauts!

Imagine this view from your office window!

So, you want to be an astronaut?

It’s going to be a job with some ups and downs: Cramped living conditions and rubbish food, but great views and plenty to talk about at parties when you get home!

But if you’re not a millionaire or a member of NASA, how easy is it to get into space and experience some zero-gravity weightlessness?  As it happens, pretty difficult…

Since 1996, a $10 million prize was offered for the first person to do it (governments not allowed), and amateurs have going at it like the clappers! There have been some mixed successes, and today’s blog is dedicated to some of man’s attempts to break free from Earth….

Plan A: Build a Rocket

All around the world, there are groups of slightly-geeky men who spend their Saturday afternoons building and tinkering with huge rockets. These rocketry enthusiasts live for ‘launch days’ when they get to fire their treasured creations heavenwards:

Now I can see it could hold a certain attraction (cue some macho chest-slapping). But some of these rocketeers, such as the AspireSpace team in Scotland have set their ambitions to send a rocket into space. Sadly, most such amateur groups don’t get anywhere near! Even though dozens of these groups exist they tend to flash in and out of existence – disappearing as soon as the magnitude of the task hits home.

Take a look at this hilarious failure:

Space poodles, whatever next?

One of the main problems that amateur rocket builders face is that space is about 60 miles up! Getting that high needs a lot of energy: Just sending something the size of your pet poodle into space would need about 2 tonnes of fuel!

But one plucky US team did manage to do it; in 2004, their aptly named “Go Fast Rocket” soared to an incredible 72 miles!

Although these ‘backyard rockets can be impressive, they are no way big enough to carry a person [sigh]. So, if you want to get past the final frontier from your garden, you will need to do something a bit bigger and more robust..

Plan B: Build a Bigger Rocket

One amateur Duo from Denmark have been working away hard building a rocket big enough to fit a person in: 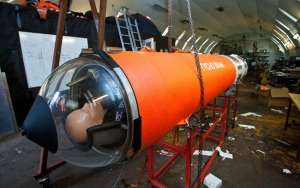 Then in September 2010, a planned test launch ended up a disaster: The crowds were ready, the government had agreed, and the countdown started… But nothing happened!

A puff of smoke and then not much else... Click to watch video

They think it was something to do with a clogged fuel value. They are going to have to wait until later in 2011 to try again.

Plan C: Get a Big Balloon

Freefalling from 20 miles up! Madness!

Getting to space in a balloon? You must be kidding!

If you’re thinking of getting into space with a hot air balloons, you can forget it. Helium balloons on the other hand have a fighting chance. In 1960, US Air Force Captain Joseph W. Kittinger skydived from a balloon gondola at 102,800 feet (a third of the way into space).He was wearing a pressurised suit and fell so fast that he created a sonic boom!

Using high altitude balloons to get things to the edge of space has become something of a rediscovered art: Google recently sent one of their new phones to the edge of space (click here to read more). In a clever bit of marketing, they explained they wanted to ‘see how well the telephone’s sensors coped in space’!

A Rockoon': a high altitude balloon with a rocket attached. They were trialled extensively in the 1950s but the idea didn't seem to catch on (click to watch video)

An Advert for Teachers in Space!? I think a Birthday message would be a nice idea!

Balloons could well be the future for affordable space travel. Last year, British paper-folding experts even used a high altitude balloon to fly a paper space plane from the edge of space (read the full story here).

And now you can even send a message of your choice into near-space: Balloon building amateurs ‘JP Aerospace‘ will put an advert in space for you, from as little as $400! They are ploughing the profits into constructing a huge airship that will take passengers into space. Eventually they plan to build an orbiting Space station made out of balloons! Hope no-one’s scared of heights…

If you want to be an amateur astronaut, then starting out by building a water rocket might be a good place to start. To get going all you need is:

And if you think Just for kids, then think again: the world record for a water rocket is a staggering 2,000 feet!

Today: A bottle rocket. Tomorrow: A spaceship to the stars?!

Learn more about the X-Prize.

The United Kingdom Rocketry Association to find a club near you!

Read about sky diving at 20 miles up here!

I love writing about science and health subjects. Strange, because I also teach the same things. I trained as a medical doctor before turning my hand to other things. Shortlisted for The Guardian/Observer for Science Writer of the Year 2011 and editor for Guru Magazine I also like to grow large pumpkins...
View all posts by Stuart Farrimond »
« Interview with a Bomb Disposal Expert: Meet the man who saved Trowbridge Town!
The Top 10 Medical TV Myths »