How To: Survive Global Warming

It’s much easier not think about things that make us feel uncomfortable. We’ve trashed the rainforests, polluted the seas and wiped out hundreds of animal and plant species. The media delights in feeding us a diet telling us how increasing carbon dioxide levels are inching us ever closer to an environmental catastrophe.

In the face of climate change, how can recycling a supermarket carrier bag make any difference?

Hopefully today’s blog might help you shake off any climate-change-blues! Because lurking behind the tabloid headlines, there are lots of very clever people working hard to come up with some very clever solutions. Read on, you brave person to find out what life in the future might look like; you never know, it might not be as bad as you think…

The oil and coal problem

Since the industrial revolution, we’ve been using up oil and coal like it’s going out of fashion. So insatiable has our appetite for cars, planes and electricity been that have bled the earth dry of these fossil fuels.

What should we do then? If we were running out of money, we’d probably cancel the expensive night-out and wait for the next pay-day. The problem we face is that there isn’t another pay-day and there is no overdraft facility! We have built practically every industry and modern way of life on either oil or coal. Staring in the face of fossil fuel bankruptcy, we’ve got to do some serious oil and coal budgeting. We need to make the change from using oil for transport and coal for electricity. And we need to make the change fast.

Most of us don’t understand properly the issues surrounding climate change. I found this brilliant animated video that helped me understand the problems we are facing. Watch it and be educated and hopefully inspired!

The video was put together by the ‘Post Carbon Institute’: visit their website to learn more about how we all need to change our ways of thinking.

For me this means to stop ignoring the problem and start to do my bit (best get recycling those carrier bags then)!

The United Nations recently declared that one of the greatest threats to life on earth is global warming. It has been mostly caused by years of burning coal and oil. ‘Greenhouse gases’ released into the atmosphere accumulate and cause the temperature of the Earth to slowly rise. The effects of this are dramatic: rising sea levels, more extreme weather and major disturbance to plant and animal eco-systems.

Help I need a way out!

‘Green Float’: The City of the Future?

Here’s a whacky solution to rising sea levels: floating cities! In an idea reminiscent of the movie ‘Waterworld’ (albeit a more high-tech one), Japanese inventors think that we should abandon land altogether: 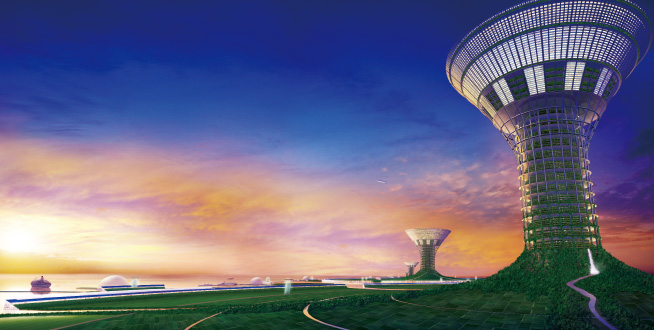 Could this be a vision of the future? Click to see a plan of how one tower might look

I can imagine what you’re thinking, won’t we get sea sick!? The inventors think they’ve got all the bases covered with their futuristic Noah’s Ark:

Apparently up to 50,000 people could live in one of these floating cities and plans are afoot to start building them by 2025! 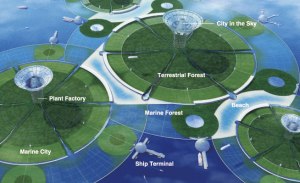 Would you want to live on a floating city? Click the image to watch a video explaining more...

Would you want to live on a floating city?

Cities in the sky? To me, it sounds a bit like ‘pie in the sky’. Ten thousand people stuck up one tower? No thanks.

That said, it could be a lot better than the solution offered by the animated science fiction sitcom Futurama… (could dropping blocks of ice into the sea really help!?)

What about the Ozone layer?

Can you remember the hole in the ozone layer crisis? It was all across the news in the 1980s. In 1989 laws were brought in to ban ozone-delpeting chemicals: like CFCs (chloro-fluoro-carbons) in aerosols. Since then the Earth’s protective ozone layer has healed itself! 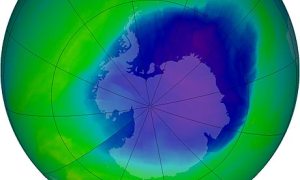 “”Perhaps the most startling lesson from the ozone hole is just how quickly our planet can change.” Dr JD Shanklin

NASA have put together a good summary of global warming here.

Click here to read more about the ‘Green Float’ project (lots of pictures and diagrams)!

Is global warming a hoax? Have some questions answered here.

What will the future look like? See maps of the effects of climate change.

I love writing about science and health subjects. Strange, because I also teach the same things. I trained as a medical doctor before turning my hand to other things. Shortlisted for The Guardian/Observer for Science Writer of the Year 2011 and editor for Guru Magazine I also like to grow large pumpkins...
View all posts by Stuart Farrimond »
« Take the Music Personality Test! Find out what Your taste in Music says about You!
Update: The Secret of Eternal Youth – Scientists actually reverse the aging process! »

5 thoughts on “How To: Survive Global Warming”