A fireball erupts as civilians shriek and run for cover. A security officer burns and a gas mask-wearing man dashes through the smoke. Men beat each another with bats and stones. Shots are fired and grenades hurled as a city centre descends into chaos. Is this a scene from a warzone? No – this is modern-day Europe.

As Greek politicians try to balance the books by slashing pensions and cutting welfare, violence spills onto the streets of Athens. Protestors hold fists skyward and chant “Don’t obey the rich – fight back!” Amidst drastic ‘austerity measures’, such scenes are becoming frighteningly commonplace.

Spain, Iceland, Portugal and now Greece have witnessed their populace flooding the streets in protest of such ‘social injustice’. Europeans don’t like to take things lying down it seems; but this would never happen in the good old USA…

Researchers at Harvard and Princeton University have studied the differences between how Europeans and Americans view social inequality. Their conclusions are startling: Europeans don’t care about the poor but Americans do…

Does Social Injustice Bother You?

Historically, European governments have been generous toward the poor. Nearly half of the European purse is spent on welfare and benefits (compared to less than a third of the US budget). Now the purse strings are being tightened things have changed.

American researchers Alensina, Di Tella and MacCulloch examined the results of 124,000 life-satisfaction surveys from both sides of the Atlantic. Analysing the data and correlating it to wealth, social inequality and political views, they uncovered some remarkable trends:

But there’s a completely different picture on the other side of the pond:

Many commentators argue that the main reason for the striking difference between the continents is the ‘American Dream’. To US citizens, their society offers them more opportunities to get rich and move up the social ladder – being poor now doesn’t mean being poor in the future. 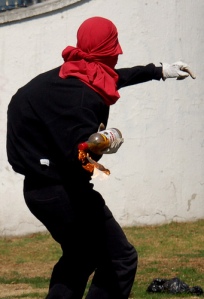 Some say that Europe is ‘obsessed’ with equality: The poor view themselves as being ‘trapped’ and in need of financial assistance to better their standard of living. It therefore makes perfect sense why so many of the public are taking to the streets when they see their existence under threat from cuts.

Could the solution to Europe’s woes be for them to embrace the American model more? Perhaps.


UPDATE (9th Aug 2011)! A new post – The Psychology behind the London Riots (and is there anything we can do?)

.
Thanks for reading – Your comments and feedback are warmly welcomed!

A stunning photo slideshow of the recent Greek riots (FT)

Updates from the Greek Streets in English (Occupied London)

I love writing about science and health subjects. Strange, because I also teach the same things. I trained as a medical doctor before turning my hand to other things. Shortlisted for The Guardian/Observer for Science Writer of the Year 2011 and editor for Guru Magazine I also like to grow large pumpkins...
View all posts by Stuart Farrimond »
« Surely not! Is this Energy Drink marketed at Children!?
New Research Asks: Could you hack a night shift? »